We Are Here to Serve You!: Public Security, Police Reform and Human Rights Implementation in Costa Rica Quirine A.M. Eijkman 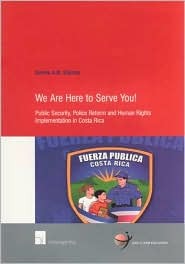 Other objectives included the need to deal with rising crime and violence rates, growing citizens feelings of insecurity, human rights violations, and, particularly, police involvement in them and the desire to professionalize law enforcement. Although there is some empirical research on public security and police reform in transitional societies, little is known about its impact on non-transitional societies such as Costa Rica.

This study evaluates how human rights reform was implemented within the Costa Rican police. On the basis of qualitative and quantitative data, it discusses the effect of police human rights strategies. It explores the following questions: Is there a relationship between the implementation of formal human rights law and changes within the social systems in which law enforcement officials operate?

Which socio-political and institutional factors relate to the implementation of human rights within the national police system and the urban police units? Are police officers of the Public Force in San Jos increasingly stimulated to comply with the norms, standards, and values that human rights portray? We Are Here to Serve You! opens a dialogue about the complexities of such human rights implementations.

Comments
Comments for "We Are Here to Serve You!: Public Security, Police Reform and Human Rights Implementation in Costa Rica":