Fathers on the Frontier: French Missionaries and the Roman Catholic Priesthood in the United States, 1789-1870 Michael Pasquier 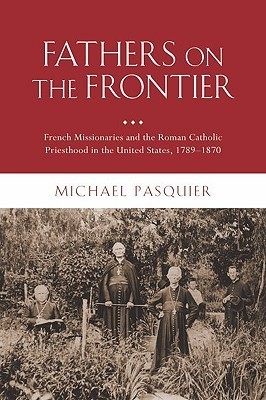 Fathers on the Frontier explores the diverse ways these missionary priests guided the development of the early American church in Maryland, Kentucky, Louisiana, and other pockets of Catholic settlement throughout much of the trans-Appalachian West. Over the course of their evangelistic endeavor, this relatively small group of priests introduced Gallican, ultramontane, and missionary principles to a nascent institutional church prior to the immigration of millions of European Catholics in the nineteenth century.As author Michael Pasquier shows, this transformation of American Catholicism did not come easily.

Several generations of French priests struggled to reconcile their romantic expectations of missionary life with their actual experiences as servants of a foreign church scattered throughout a frontier region with limited access to friends and family members still in France. As they became more accustomed to the lifeways of the American South and West, French missionaries expressed anxiety about apparent discrepancies between how they were taught to practice the priesthood in French seminaries and what the Holy See expected them to achieve as representatives of a universal missionary church.At no point did French missionaries engage more directly in distinctively American affairs than in the religious debates surrounding slavery, secession, and civil war.

These issues, Pasquier argues, compelled even the most politically aloof missionaries to step out of the shadow of Rome and stake their church on the side of the Confederacy. In so doing, they set in motion a strain of Catholicism more amenable to Southern concepts of social conservatism, paternalism, and white supremacy, and strikingly different from the liberal, progressive strain that historians have usually highlighted.

Focusing on the collective thoughts, feelings, and actions of priests who found themselves caught between the formal canonical standards of the church and the informal experiences of missionaries in American culture, Fathers on the Frontier illuminates the historical intersection of American, French, and Roman interests in the United States.

Comments
Comments for "Fathers on the Frontier: French Missionaries and the Roman Catholic Priesthood in the United States, 1789-1870":